As readers of this blog will know, on the 19th October we recaptured a Goldcrest that had been ringed as an adult on the Calf-of-Man on the 7th April.  Today at Ravensroost Woods we recaptured another Goldcrest the alpha part of the ring, KNH, was the same.  When I got home I messaged Aron Sapsford, the warden at the Calf-of-Man observatory, and got confirmation that this bird was ringed there on the 5th September this year.  If we get a third I might seriously have to look into some sort of monitoring project to see whether this is a new migration route!  This was the bird that made the journey, a juvenile male: 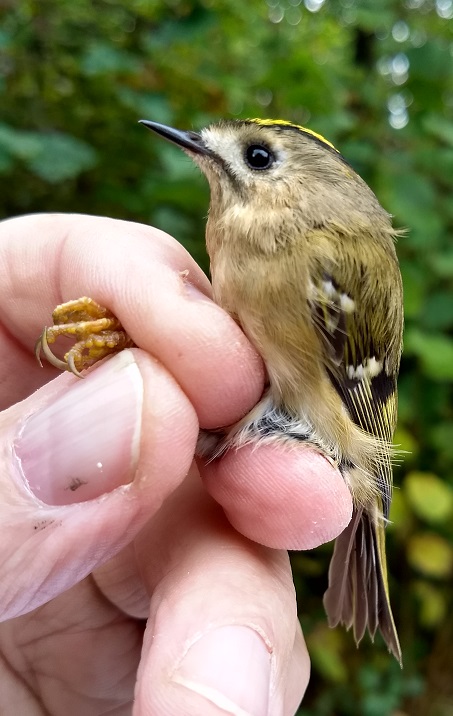 It has a wing length of 54mm and weighed in at just 5.3g: astonishing.

This was the first time we have managed to make one of our scheduled sessions in Ravensroost Woods for 2.5 months, due to bad weather on the chosen dates.  The weather forecast was for it to rain overnight, with the rain stopping at about 7:00.  I was joined for the second time by Alice. Not wanting her to make the long journey from Cheltenham to Braydon Forest, only to have the session cancelled at the last minute, we arranged to meet at 7:30, to be sure that the weather was following the forecast. It nearly did!  The rain wasn’t hard: there was a mist of very fine rain whilst we were setting the nets, which cleared eventually at about 9:00.  After that it stayed dry, and occasionally sunny, until we started to pack away at 11:50, whereupon it started with the very fine rain again.  We managed to get 2.5 hours of ringing activity in, in relatively good weather. The wind was non-existent.

The Goldcrest was the clear highlight of the session: ironically, one of the last birds extracted.  However, it is always pleasing to catch and ring a couple of Nuthatch.  They are always heard but we don’t catch large numbers. These were number 13 & 14 for the year, but only 2 & 3 for Ravensroost, with the other being back in June.

Outside of the ringing activity, we were treated to a pair of Ravens making their presence known for several minutes as they flew around overhead. It took 7 years since I started birding Ravensroost in 1998 to see my first there. They are still only an occasional sighting. I look forward to the day they choose to nest there!

The wood was also full of Long-tailed Tits but we didn’t catch one, unlike our recent forays to the Firs, Red Lodge and Webb’s Wood.  Perhaps the ones in Ravensroost are cannier!

One annoying footnote: once again a “responsible dog owner” has stolen the please keep dogs on a short lead sign from the main gate. They came prepared, as after the previous five times, it had been fixed with security screws!  The arrogance and entitlement of these people beggars belief.  Somerford Common, with no restrictions, is less than three minutes away but they insist on vandalising a nature reserve!